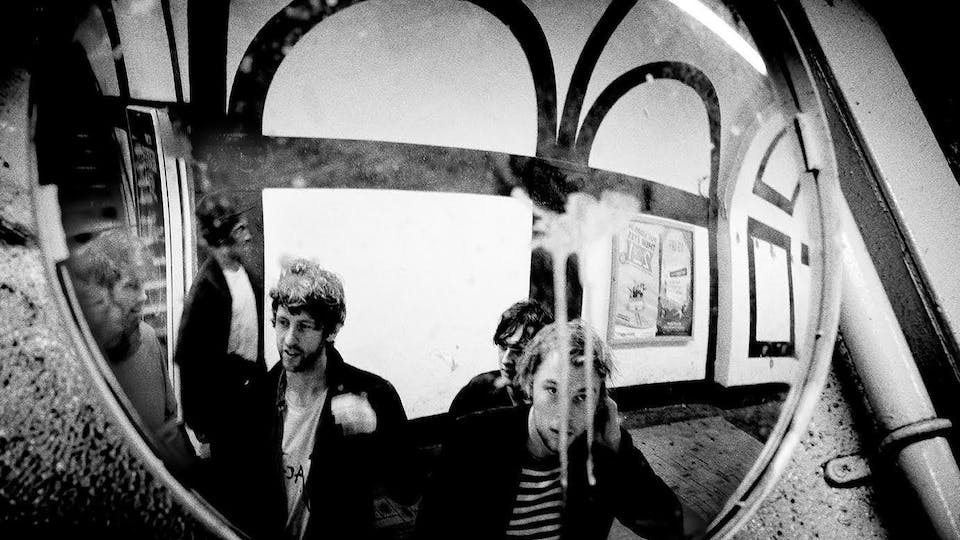 If you've seen Girl Band live, you understand. If you've heard 'The Early Years' EP or one of their early, handmade releases - or perhaps if you've seen the not-for-the-squeamish video for their eight-minute cover of Blawan's "Why They Hide Their Bodies Under My Garage," you've got a sense.

'Holding Hands with Jamie,' Girl Band's debut album, comes a few years into their tenure; a few years after their first tour; nine days crammed into a Fiat Panda; a few years of stamping 7" sleeves to sell at merch tables and mail-order; a few years of writing songs and touring and developing a live ferocity unmatched by nearly anyone. Recorded in April 2015, two days after returning home from their first-ever US tour, the nine tracks making up 'Holding Hands with Jamie' capture, more than any previous recordings, the tension and abrasive energy of a Girl Band performance.

Going into the studio (Bow Lane, Dublin) to record an album - rather than a track or two here and there - "required a different mindset," guitarist Alan Duggan explained. "It was way more challenging to stay focused - tricky to find a balance between keeping a distance from the songs for perspective but also to fully concentrate on them." While they had the luxury of studio time ("we spent three or four days just setting up drums, amps, and mics"), the band laid down seven of the tracks in less than two days, ensuring that the record pulses with vitality and forward momentum.

Recalling any number of things but for only milliseconds at a time, Girl Band make a mockery of comparisons, because you can only get as far as "oh this bit sounds like--" before a guitar scuff-screams, the bass crunches like a car in a bailing press, or something else visceral and glorious comes from the speakers, and the thought's erased.

This young Dublin foursome are creating vital, propulsive, and almost terrifyingly energetic noise-rock that pulls as much influence from classic techno as from their more obvious post-punk, noise and industrial predecessors.