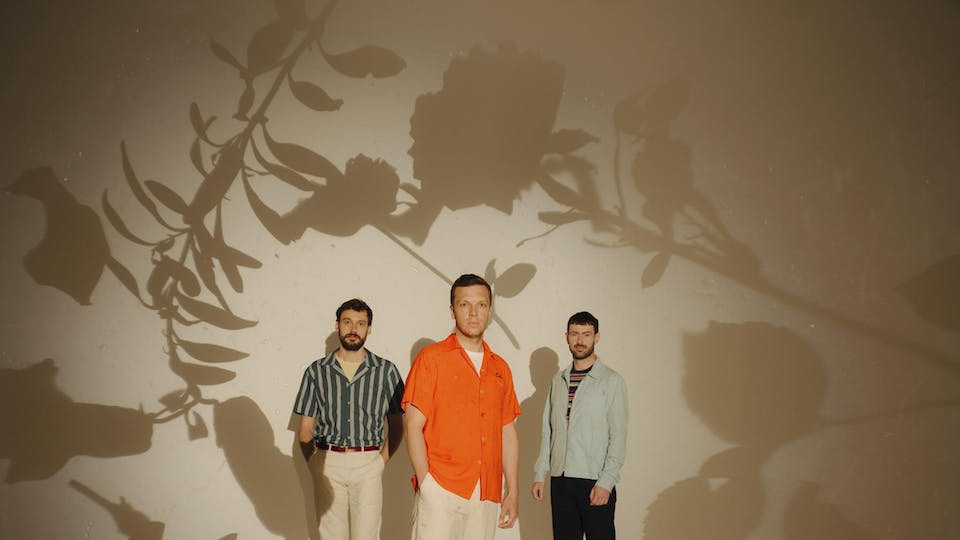 "If we had an manifesto for this album" says Friendly Fires' singer and bass-player Ed Macfarlane, "it was a simple one; make an exciting, colourful pop record"

"Our goal is to make vibrant, widescreen songs" adds guitarist Edd Gibson. "but they must retain a spontaneity, have an energy and mysticism around them."

"We try really hard to focus on making everything sound as spontaneous and fun and off the cuff as possible," nods Ed.

"Only we spend months doing it," deadpans drummer Jack Savidge. It has been three years since Friendly Fires released their self-titled debut album. For an album entirely recorded in Mr and Mrs Macfarlane's garage, it made a serious impact, selling over 200,000 copies and picking up a fistful of Brit Award and Mercury nominations along the way. The band's appeal spanned everyone from indie kids to clubbers to the highest strata of the fashion world -- the band were handpicked by Gucci to soundtrack a worldwide campaign, covering Depeche Mode's Strangelove for an advert created by acclaimed director Frank Miller (Sin City, The Spirit). Most importantly they have watched their global audience grow exponentially as their live shows become ever more spectacular. Two sold out dates at London's 2500 capacity Kentish Town Forum found the band transforming a normally rather drab venue into a Brazilian carnival. Friendly Fires' all-night club events sprang up where the trio would be joined by guests like Hot Chips' Joe Goddard, Danilo Plessow's Detroit-centric Motor City Drum Ensemble and Kompakt Records boss, Michael Mayer.

Of course, one day, the touring and the promotion ended and the band realised they had to make a new record, prove themselves all over again. How would they do that?

"We're not the sort of band who write songs in sound-checks or on the back of the tour bus," laughs Ed. "You think you'll be really inspired by touring, all these mad places you visit, but that's a myth really. Well it is for me. When we came off tour I remember thinking, 'I hope I can still write songs...'"

So in October 2009 Friendly Fires began to piece together the ideas and themes that would become their new record, Pala. They began in a basement studio in Shoreditch called, with admirable candour, The Basement, but London's ever-present distractions kept them from really focusing, so in January 2010 they moved operations back to their original home, Ed's parent's garage in St Alban's.

As soon as the band let go and began to work "bizarre hours" Pala began to take shape. The shifting, shuffling Chimes took serious shape, as did the Afro-beat pop explosion of Pull Me Back To Earth. The brilliantly frenetic True Love soon appeared and was, with its slap-bass and shimmery guitars, clearly and immediately, a very Friendly Fires sort of song. "Once we were away from everything we were fine," Jack says. "Because all we were left with were our ideas."

And what ideas they were. Camera shutters, guitar lines inspired by old Hawaiian records, ancient home-recorded cassettes, bells ringing and bird-song all appeared as endlessly manipulated samples as the songs were, in classic Friendly Fires manner, painstakingly built up piece by piece.

When the garage became too crowded Ed took himself off to a rented seafront house in out-of-season Rye to work on melodies and lyrics. "Mine was the only house on the whole street that was occupied," he says. "I was forced into being creative."

Last autumn, as Edd and Jack worked on songs, Ed packed up again and drove a van all the way to a converted barn in Yvetot in the far north of Upper Normandy. This would be where the album's lyrical themes would really develop.

"It was miles from the nearest neighbour," Ed says. "It was quite scary actually -- the place was haunted. No television, no internet, no central heating. I had to get firewood every day. It was very rustic..." But the barn's isolation worked brilliantly.

"It exaggerated all my emotions," Ed says. "Which is great for songwriting. A lot of the songs on this record are about rejection and loneliness, my own search for what really is true love?"

Three weeks in Ed was getting cabin fever and jumped a train to Rouen. When he got back to he wrote the broken-hearted, disco- scented Running Away, which is all about being afraid of admitting your feelings for someone close to you. It's still one of his favourites. The trick Pala pulls of so wonderfully is making the melancholic sound so euphoric, putting Ed's worried words up against the brightest, toughest music they've ever made. Show Me Lights is spectacular, with a real Hollywood sheen, yet still massively heavy, pure pop.

"I feel nostalgic for that mid-to-late 90s, hip-hop meets chart pop meets RnB sort of music," Ed says. "I love those N-Sync or Backstreet Boys records, tough hi-tech pop with hugely detailed production. And slamming percussion too. Having said that I probably hated it at the time!"

"But that era of pop music does feel like it had more soul," Edd nods. "Nowadays you hear the same synth sounds on everything -- it all feels soulless and sterile.

Ed, Edd and Jack talk with great enthusiasm about Talking Heads, Tom Tom Club, Timbaland and Scritti Politti, artists who made brilliant pop records with a sense of otherness, but also of the genius techno of Carl Craig and Boards of Canada too. "It's those odd chords," Jack says. "That edge of romance and nostalgia -- music with heartbreak but not melodrama."

"It's about honesty," Ed says. "A lot of house and disco music has simplistic lyrics, they're not trying to be clever, like indie music so often is. That cleverness doesn't appeal to me -- I like dancing to music where someone tells you something real, 'I need your love!' That's a million times better than someone being clever.

The title track was inspired by Aldous Huxley's 1962 novel, Island.

"I liked the idea of this utopian society where everyone gets along but it all fails anyway," laughs Ed. "The idea that paradise is temporary and you must enjoy it while you can really applies to my life -- and to most people I know. A doomed utopia is a great symbol for music!"

So, three years later, Friendly Fires can't wait to get back into it. They feel 2011 is a great year for the record, after music's minimalistic wallowing of the last couple of years. The band have now been playing together for half their lives, so another long stint on the road together holds no fears. "We argue and get heated about things, but it's not an ego war," laughs Edd. "We can disagree without it becoming a fist fight."

And after amazing shows in New York, Australia and Japan they are ready to take this brilliant new record to the rest of the world.

"It's daunting," Ed says. "But we're ready for it. The truth is, there's just not enough music out there that's really celebratory."